Many fish species show some kind of sheltering behavior. Most fishes seek for shelter, if available, as a physical protection against potential attackers or other threats and many species use shelters for other purposes, too (Kerry and Bellwood, 2017). Most fish-rearing facilities in aquaculture and fish-based research consist of barren tanks where environmental complexity is very low. This has raised concerns about the welfare of fish in captivity and different kinds of environmental enrichment have been tested as potential strategies to promote the welfare of captive fish, with different degrees of success depending on the species, enrichment type and type of welfare indicators considered (Näslund and Johnsson, 2016). In a series of experiments, we have focused on the effects of structural enrichment, in the form of simple PVC-screen shelters, on rainbow trout juveniles. In brief, growth, condition, external damage and stress resilience were monitored in the presence and absence (controls) of shelters. Furthermore, the potential effects of early-life exposure to shelters on the future performance and physiology of the fish were also evaluated.

In a first experiment, the immediate effects of exposing fish juveniles to the PVC shelters were tested. Juveniles (mean individual mass: 15.0 g; SD: 4.0 g) were reared in the presence or absence of shelters for up to nine weeks, in triplicated groups. Growth performance, condition and external damage in fins, skin, eyes, operculum and snout were monitored. Basal stress levels and the physiological responses to standardized acute and repeated stressors were also evaluated.

In a second experiment, fish were introduced to the shelters at an earlier stage (mean individual mass: 1.5 g; SE: 0.1 g) and fish groups were reared in the presence or absence of shelters for four months. The effects of shelter presence on growth, condition, external damage and stress resilience were monitored as in the previous experiment. In addition, shelters were then removed and, after some weeks of acclimation, fish juveniles grown in the presence or absence of shelters were allocated together after being PIT-tagged. The performance of the fish during co-habitation was monitored, both in normal rearing conditions and in conditions promoting competition (low density, low specific feeding rates), to evaluate the effects of the early exposure to the shelters on fish performance and coping/competitive ability.

In this study, the design of the shelters was intentionally kept as simple as possible, since one of the main aims was to test the feasibility of using the shelters in the farm environment. In the presence of shelters, fish showed very marked sheltering behavior when submitted to disturbance, demonstrating a clear behavioral preference for shelter use when threatened. However, there were no major differences between sheltered and control (barren) tanks in terms of growth performance, condition factor, external tissue damage, or stress resilience, at least when fish were reared in normal conditions in terms of stocking density and feeding rations. Competitive tests showed that fish grown in the presence of shelters had an inferior ability for competition/growth when the stocking density was kept very low and feeding rations were restricted. It is at present unclear whether such an effect on competitive ability could have been prevented by increasing the time for acclimation of shelter-grown fish to the absence of shelters.

In view of the obtained results, the answer to the question posed in the title of this communication is complex. Fish had no apparent physiological- or performance-related benefits when giving the opportunity to live in a structurally enriched environment; however, they showed a clear behavioral preference for the shelters, particularly when disturbed. Regarding animal welfare, the importance of having access to preferred/wanted items and/or situations differs among the different approaches to the concept of Welfare (Maia and Volpato, 2016). Therefore, the relevance of the shelters for fish welfare in this case could be open to debate since it would depend on the considered welfare approach. It remains to be investigated whether using similar shelters in outdoor facilities, where the chances for external interference/stressors are much higher, would have stronger effects on fish performance and/or welfare. 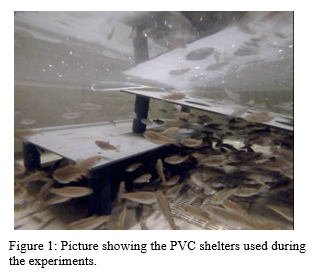