In aquaculture, loss of nutrients in the surrounding environment is an important concern. The benefits of associating aquatic organisms to use nutrients released from fish farming is well reported in the literature, but in general the documented applications at a commercial scale remain scarse. In the same time, Fish oil and fishmeal included in feed are also pointed out to contribute to the depletion of natural resources and to be in competition with direct human consumption. Hence, to maximize the use efficiency of nutrients, the system presented was designed to associate three different organisms of commercial interest and differing from seabream (Sparus aurata) for their trophic level, while using only local vegetal raw materials in the formulated fish feed. In addition, fresh discarded mussels, were directly supplied to the fish to balance their micronutrient and fatty acids needs. Thus, the aim of this study was to assess the performances of this system, by monitoring the water quality and the growth performances of the different organisms reared.

The water concentration in oxygen was a key parameter of the system. In the fishpond, oxygen was at low levels in the morning despite the air adduction, so a special attention was paid to that in postponing the feeding time to the afternoon. The different concentrations in N and P, and physical indicators in water, like oxygen concentration, observed in the pond 4, reflected the ability of the system to improve the quality of the water released from the fishpond. Moreover, no water was discharged from the system along the rearing period, resulting in the save of water and in the preservation of the surrounding environment. In the system tested, good results were obtained for fish growth and feed conversion ratio, despite the lack of fishmeal and fish oil in the feed. Without additional specific source of nutrients in the system, except than the feed supplied to the sea bream, the body growth of the others organisms reared were similar and even higher (filling ratio and survival rate of the molluscs) compared to their usual monoculture in ponds (based on expert experience). Variations in the performances of the different species among the ponds give interesting perspectives in the improvement of this IMTA system, especially on optimization of animal densities and in adding a compartment dedicated to seaweed cultivation. 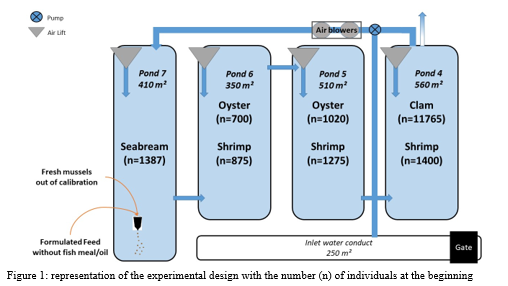