Fish health and welfare are among the top priorities in what aquaculture research is concerned. Stress-inducing husbandry and rearing conditions (including alternative dietary formulations), bacterial infections or parasitic diseases may all lead to chronic inflammation (1, 2). Such an immune response channels energy away from growth, reproduction and other important physiological processes, to fuel immune-related metabolic responses. Despite a reasonable amount of studies on fish immune response, there is a lack of a solid inflammation model for fish and a battery of biological markers that can more accurately characterize chronic inflammatory responses. The present study aims to gather information on molecular, cellular and humoral parameters of European seabass (Dicentrarchus labrax) undergoing chronic inflammation that can be used as health indicators for applications in fish health management.

Juvenile European seabass (300 g ± 71.8) were acclimatized in a recirculating seawater system (temperature 16 ºC; Salinity: 35; Photoperiod: natural summer time; n = 12) for 30 days being fed a commercial diet throughout the whole experiment. At the end of this period, fish were intra-peritoneally injected with either Freund’s Incomplete Adjuvant (FIA) to induce inflammation or Hanks Balanced Salt Solution (HBSS) to serve as sham, and distributed in duplicate tanks in the same system. Fish were sacrificed at 24 h, 7 days, 14 days and 21 days post-injection (n = 3 per tank). During sampling, blood was collected from the caudal vein and directly used for total peripheral cell counts, blood smears preparation and respiratoy burst. Plasma was then obtained for the assessment of humoral immune parameters. Peritoneal exudates were collected for total peritoneal leucocytes counts. The head-kidney was sampled for the evaluation of immune-related and opioid receptors gene expression measured by real-time quantitative PCR.

FIA is well-known to trigger and enhance inflammatory responses, thus serving as a very effective adjuvant during vaccination. Indeed, the results here reported are clear indicators of an inflamed peritoneal cavity and an ongoing systemic immune response that persist at least for 21 days. Locally, inflammation was characterized by an intense recruitment of immune cells that was still evident 21 days after injection thus illustrating the chronic character of the immune response. Cellular response was also noticed peripherally with neutrophils, lymphocytes and monocytes numbers rising in the blood of FIA-injected fish. Furthermore, cellular-mediated respiratory burst peaked at 21 days post FIA injection, suggesting that phagocytes were still actively fighting the phlogistic agent. Respiratory burst is a particularly interesting parameter to be seen enhanced at such a late time-point, as it is a key discriminant feature of active phagocytes (3), very much present at the onset of inflammation. Regarding the head-kidney molecular analysis, pro-inflammatory genes (il1β, casp1) were indeed higher in fish injected with FIA but such effect was regardless of sampling point, making these poor markers of a prolonged response. il34 expression time-dependent increasing trend poses as good marker of chronic inflammation due to its importance as a second ligand of CSFR1, a pathway with high relevance in chronic inflammation settings (4). In conclusion, peripheral leucocyte counts and respiratory burst analysis seem to be reliable indicators of chronic inflammation easily obtained with a blood sample. Further investigation is nonetheless required to select more responsive and specific molecular markers. 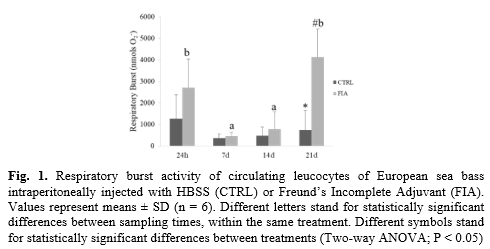