Renewal of the water in sea cages is based on sea currents. During summer and early autumn, there is a critical phase for cultured populations as temperature may rise close to the tolerance level of the fish species cultured, and there is a consequent increase of fish metabolism and the need for an increased amount of oxygen. At the same time, the available amount of dissolved oxygen in seawater is lower (Makridis et al., 2018). An additional problem is that during this period of the year, fish pens exhibit increased fouling due to epiphytic organisms, which in its turn may decrease the renewal of the water inside a fish cage.

The aim of this study was to: i) monitor the effect of aeration of the water inside two cages (with and without aeration) by measuring the oxygen concentration every 30 min inside the cages throughout the experiment, ii) take samples before, in the middle, and at the end of the experimental period and measure the expression of important digestive enzymes in liver, intestine and pyloric ceca, iii) evaluate the state of the digestive system at the same sampling points through histological examination in liver, intestine and pyloric ceca, and iv) monitor the oxygen fluctuations in four cages at  Galaxidi Marine Farms A/S during one year in four cages, two with seabass and two with gilthead seabream.

A population of seabass of approximately 14 tons was split into two cages in a fish farm in Greece (Zervas Kyriazis A/S) which was situated in the Vorios Evoikos Gulf (38°39ʹ1.26″N, 23°6ʹ13.34″E). The cages had a circumference of 40 m and a depth of 8 m. One optical oxygen and temperature sensor was used in each cage and a third one was used as a reference outside the cages. The probes were placed at a depth of 3.5 m and took a measurement every 30 min.  The air was injected to the cage through a ring of AirX (Oxyvision A/S Norway) hose. The injection of air took place in one cage in two periods per day from 13th of August to 15th of September 2014, 9-12 a.m., and 9-12 p.m.  Tissue samples were taken  twice from liver, gut, and pyloric ceca of fish from both cages for histology analysis fixed in 4% formaldehyde and for enzyme gene expression stored in RNA later at -80oC . Tissues were analyzed using histological methods (embedded in Technovit 7100, cut in sections of 5 μm, stained with methylene blue/azure II and basic fuchsin). The sections were then observed through light microscopy and photographed.  Lipid deposition in liver was quantified by use of ImageJ software.  The expression of two genes related to lipid metabolism was studied, phospholipase A2 (PLA2) and Hormone Sensitive Lipase (HSL). Phospholipase A2 catalyzes the hydrolysis of phospholipids and serves for the initial digestion of phospholipid compounds in dietary fat, while lipase  hydrolyzes stored triglycerides to free fatty acids. Real-time qPCR was performed with housekeeping genes ACTb, L17 and EF1a.

In a second trial performed at Galaxidi Marine Farms A/S, four Guardian xO2 sensors (Meox A/S) for monitoring of oxygen and temperature were placed in two cages with seabass (Dicentrarchus labrax ) and two cages with gilthead seabream ( Sparus aurata). Data were recorded and transmitted in real-time through MEOX cloud for  an 11-month period from April 2020 to February 2021.

The expression of PLA2 increased in pyloric caeca samples from the aerated cage, suggesting that aeration improved the absorption rate of dietary phospholipids. Expression of HSL increased significantly in liver samples from the control cage, in comparison with the aerated cage (Fig. 1). Reduced oxygen levels induced lipolysis and mobilization of the stored triglycerides, to produce energy. The increased energy demand had negative impact on the growth rate of sea bass. A previous histological examination of the same sea bass samples revealed an increased fat accumulation in hepatocytes of fish in the aerated cage. The results of the present study confirm the lipolytic effect induced by low DO levels in farmed sea bass and induced by HSL, as has been shown in other fish species (Li et al., 2018).

In the second trial, oxygen saturation level reached  15% at different periods of the summer and early autumn indicating that there is a important problem with hypoxia in cages in the sea during the most productive period of the year. 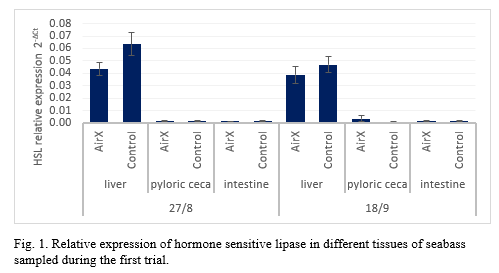