In southwest Iberia extensive and semi-intensive fish culture in earthen ponds are traditional activities in saltmarsh. The most used commercial fish species are gilthead seabream ( Sparus aurata) and sea bass (Dicentrarchus labrax ). Since most of this activity takes place in protected areas, intensifying the production is out of the question, however increasing product diversification with IMTA, may provide an answer by creating a balanced system for environmental sustainability of earthen ponds while increasing their profitability and social acceptability. L ife cycle assessment (LCA)  was used t o evaluate  the environmental footprint of  semi-intensive and semi-extensive  pond  IMTA in comparison to semi-intensive conventional fishpond production (POLY).

Scenario data for the systems considered in the study:

Comparative contributions of different impact categories of each rearing system calculated for 1 tonne of aquatic products as functional unit (Fig. bellow) show that eutrophication (Eutro ), a cidification p otential (Acid) and t otal c umulative e nergy d emand (TCED) showed the largest difference between the semi-intensive and semi-extensive production systems. Except for l and c ompetition (LC), IMTA systems had lower contribution to the impacts when compared to the polyculture system. This was most noticeable for the semi-extensive IMTA system that had the lowest impacts. The impact of the semi-intensive IMTA system on global warming was only slighter lower than that of the polyculture semi-intensive system. However, e utrophication and w ater dependence were also much lower.

Conclusions from the environmental impact study of pond integrated multi-trophic aquaculture (IMTA) in semi-extensive and semi-intensive systems in comparison to semi-intensive fishpond polyculture show that: 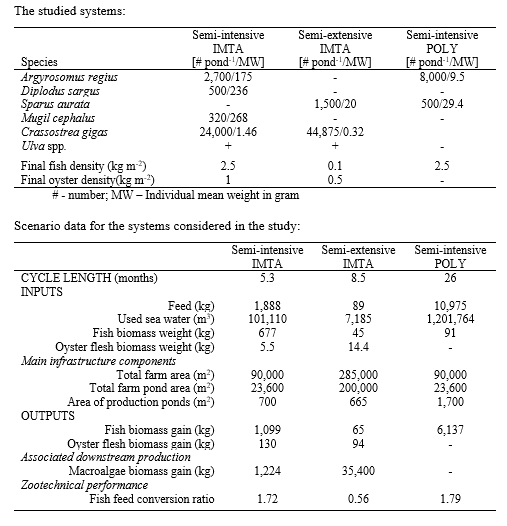 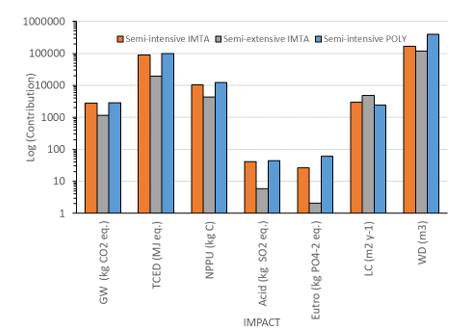