Add To Calendar 07/10/2021 16:10:0007/10/2021 16:30:00Europe/LisbonAquaculture Europe 2021A POLICY DEFINITION OF INTEGRATED MULTITROPHIC AQUACULTURE (IMTA) AS A MEANS TO STIMULATE ITS UPTAKE IN THE EUROPEAN ATLANTIC AREAMezzanine-CasinoThe European Aquaculture Societyalistair@aquaeas.eufalseanrl65yqlzh3g1q0dme13067DD/MM/YYYY

Integrated Multitrophic Aquaculture (IMTA) is an innovative and sustainable aquaculture practice combining cultivation of species at two or more different and complementary trophic levels that ultimately minimizes waste and optimizes resources. Although application of this concept has a history of centuries in various parts of the world , commercial uptake of the concept in western aquaculture is  still limited .  As part of the Integrate project,  we attempted to identify the bottlenecks hampering the implementation of the IMTA concept in the European Atlantic Area (Spain, Portugal, France, Ireland and the UK).  In round table  discussions with  the  main stakeholders, a common problem appeared: although the conceptual definition of IMTA was clear, a more utilitarian definition making some of the details explicit was necessary, for instance for regulatory purposes. In addition, by doing this, it would also help preventing administrations from inventing their own definitions and interpretations, something that is already happening at least at regional levels and that in the long run could easily lead to confusion and “dilution” of the original meaning of the concept. Here we explain the process we used to come to this definition and discuss its main results.

The infographic (Fig. 1) summarizes both the methods and the main results. In short,  expert  opinions of stakeholders (aquaculture, administration, environmental NGOs, consumers, academic, etc.)  from the European Atlantic Area  were recollected in three steps:

Reports with the results from the thematic workshops,  questionnaire and the final workshop are all available  on the project’s webpage (http://integrate-imta.eu/category/downloads/).

T here are widely contrasting opinions on the desirability of defining the IMTA concept,  nevertheless, there was clear consensus that it is an essential step in furthering the development of the industry.

It was concluded that the definition should contain reference to the following components:

Furthermore, it was also widely felt that the  definition should NOT go into details as degree of connectivity, number of species, etc. or include social or economic performance markers. Taking the above in considerations, the following consensus definition was reached:

IMTA = Enhanced production of aquatic organisms (with or without terrestrial organisms) of two or more functional  groups, that are trophically connected by demonstrated nutrient flows and whose biomass is fully or partially removed by harvesting to facilitate ecological balance.

We are aware that defining the concept of IMTA is a topic that is not without controversy. It should be stressed that the definition has not been made for the mere sake of defining, nor that it should be interpreted as a fundamental textbook definition.  Rather the aim is for it to  be useful in policy terms, to facilitate funding  and also to enable national governments to be better able to  direct licensing  among others. We will discuss the further steps that can be taken based on this definition to stimulate the commercial uptake of this concept, for instance in improving consumer acceptance of aquaculture (for instance by means of an ecolabel) and the uses it can have in integrated coastal zone management and spatial planning, topics that are currently being implemented by the Interreg AQUA&AMBI project.

We would like to thank all  partners of the Integrate consortium for their contribution to this work and all participants of the expert roundtables, respondents of the questionnaire and participants  of the IMTA  workshop in May 2019. INTEGRATE is funded by the ERDF through the INTERREG Atlantic Area 2014-2020 Programme (project grant number EAPA_232/2016). 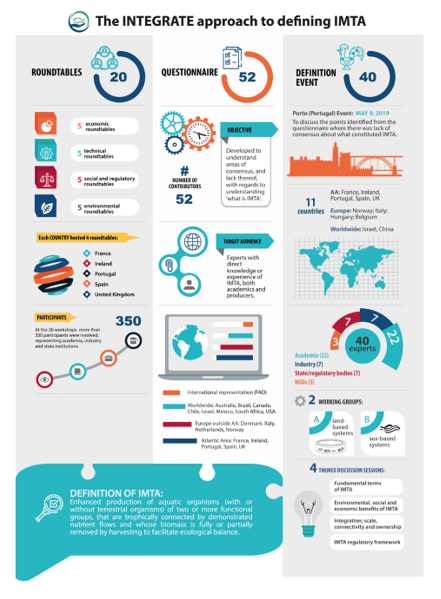