The production of Gilthead seabream ( Sparus aurata), together with European seabass (Dicentrarchus labrax), is the second most important aquaculture industry in the European Union (STECF, 2018) consisting of large companies as well as numerous small-medium sized companies which require a strong concentration on business development. However, the economic performance of these companies is generally rather poor mostly due to inefficiency and profitability issues. Therefore, a focus on increasing the production value rather than increasing production quantity would be a sustainable solution to improve profitability and adjust for long-term environmental and economic goals in the EU (Llorente et al., 2020).

The combination of Large Volumes (⌀>30m3) and low densities (≤ 16 larvae/L) has been demonstrated (Koumoundourous et al ., 2004; Boglione et al ., 2009; Prestinicola et al., 2013) to augment the survival rate and the morphological quality of hatchery-reared seabream. The aim of this study is to individuate which between ‘large volume’ and ‘low density’ is the main driver in attaining high quality seabream subadults . The design envisages to test the effects during the pre-ongrowing phase  of seabream , carried out  at a  commercial scale of : A) larger and smaller tank volumes; and B) higher and lower stocking densities .

Experimental rearing was conducted at the Intituto Portugues do Mar e Atmosfera facilities in Olhão Portugal. Seabream with an average weight of 6.7 ± 2.5g  and length of 7.8 ± 1.1cm  were selected based on external inspection carried out by experienced technicians and the  ‘non-deformed’ fish were stocked at 3 different densities (LD: 5kg/L; MD: 10kg/L; HD: 20kg/L) in both 500 L and 1000  L cylindrical tanks with a replacement rate of 100% tank volume/hour of natural seawater. Oxygen diffusers were placed at the bottom of tanks in order to maintain a O 2 saturation level above 70%. Light regime was based on natural light  and photoperiod during the summer months of August and September in Southern Portugal . Tanks were shadowed with a mesh tarp .  The water temperature in the tanks ranged 19-29° C throughout the ~60 days of rearing upon reaching  an average  final  weight  of  ~55g/individual.  The tanks were regularly controlled and managed  in order to maintain the experimental densities throughout the experiment . Fish were fed 3% of their body weight/day with AquaGold 5 pellets (AquaSoja , Ovar, Portugal).

A sample of 161 seabream of those classified as ‘non-deformed’ used to begin the experimental rearing (T0 )  were  lethally anesthetized (MS-222 ) and fixed in 4% PFA and X-rayed ( Gilardoni CPX 160/4 System, Unleaded film Kodak Mx 125, 55 Kv, 4 mA) for  anatomical evaluation  of skeletal elements. After ~60 days of experimental rearing (TF),  Over 100 seabream were sampled from each experimental condition, euthanized and X-rayed with a digital DXS Pro X-ray (Bruker).

There were no significant differences in survivorship between the conditions.  Significant ( Kruskal-Wallis, Dunn’s post hoc with Bonferroni correction, p<0.05 ) smaller total lengths  were found in the s eabream reared  in HD conditions with respect to LD seabream,  regardless of the  tank volumes (Fig. 1a). Significant differences were also found  in  the Fulton’s  condition factor (Fig. 1b) of HD versus LD seabream regardless of the tank volumes.  Taking into consideration that the final weights were not significantly different, the metrics enhanced the point that seabream in the HD conditions were characterized by a positive allometric growth.

X -ray images showed a  progressive augmentation of lordosis , kyphosis,  jaw  and  opercular anomalies with increasing density , independently from the  volume (Fig. 2).  Consequently,  stocking d ensity seems to be  a  primary driver in increasing  the frequency of  these skeletal  anomalies rather than the  tank volume . When considering differences among fish reared in different tank volumes , the prevalence of particular anomaly types appeared different: i.e.,  at the same stocking density,  the  1000 L rearing conditions yielded a lower prevalence of opercular and jaw anomalies  and higher prevalence of both lordosis and vertebral body fusions, when compared to the 500 L conditions of the same density.

Lastly, a lthough  the initially selected  seabream were labeled as ‘non-deformed’ upon external inspection; the X-rayed images tell a different story as the T0 seabream did in fact have many skeletal deformities (Fig 2).

This project has received funding from the European Union’s Horizon 2020 Research and Innovation Programme under the Marie Skłodowska -Curie grant agreement No. 766347, BioMedAqu ETN 766347.

This project has received funding from the European Union’s Horizon 2020 Research and Innovation Programme under the Marie Skłodowska -Curie grant agreement No. 766347, BioMedAqu ETN 766347. 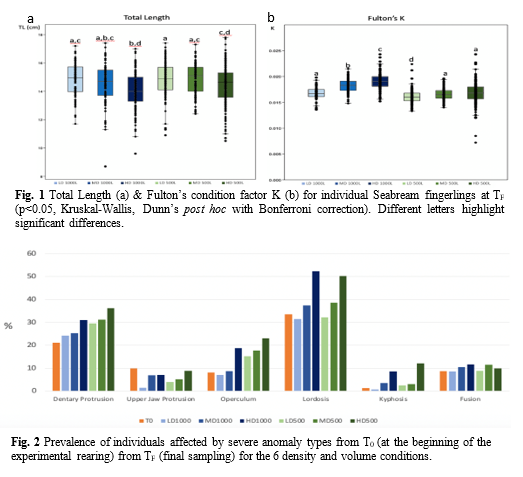