The current drive for aquaculture sustainability has  been pushing feed formulators for the design  of  novel aquafeeds,  based on  ingredients  such as insect meals , by-products of fisheries and animal production , microbial biomasses, and algae-based products.  All these ar e viable alternatives, often with inclusion levels restrictions,  to those commonly used up to date, e.g. fish meal, fish oil, soy products . A challenge associated with this transition is ensuring that novel feeds provide all required nutrients, without affecting,  and when possible improving farming performance. Effects on growth,  health  status, feed conversion, environmental impacts , and fish biochemical composition (e.g., n-3 HUFAs) from a consumer perspective, have all to be evaluated.  However, these emerging ingredients have mostly been tested by researchers and on a one-by-one basis.  Our  approach wa s to test different formulation concepts using combinations of these ingredients, rather than one-by-one. Therefore, the aim was not to test individual emerging ingredients, but rather formulation scenarios that may be relevant in the near future .  The GAIN project aims to promote eco-intensification of the European aquaculture, and therefore a more sustainable and efficient use of resources in aquafeeds, including circularity towards zero-waste is paramount. The GAIN aquafeed formulation concept starts in replacing cost-effectively fish meal and fish oil from feed-targeted fisheries, together with commodity ingredients from vegetables such as soy, wheat, and corn . Besides the obvious impact of fisheries, using plant protein and oil sources is an increasing concern, due to pressure on farmland resources, resulting deforestation, negative effects on global food security, EU reliance on imports of major crops, and carbon footprint of transportation of some of the raw materials across continents.  The present work summarizes the GAIN project effort in  testing  several alternative formulation concepts in five farmed species: rainbow trout, Atlantic salmon, gilthead seabream, European seabass, and turbot.

A total of nine nutritional trial s were performed using 4 main formulation concepts (see Fig. 1). These nutritional trials were performed  in optimal rearing conditions for  each species, at partner facilities (rainbow trout at FEM, Italy; Atlantic salmon at GIFAS, Norway; gilthead seabream at SPAROS , Portugal, and IATS-CSIC, Spain; European seabass and turbot at AWI, Germany) . The feed formulations were developed for each of the target species, taking into their nutritional requirements and tolerance to different ingredients. Feeds were produced by extrusion with oils added by vacuum coating at the SPAROS pilot feed mill (Olhão, Portugal).

All feed formulations gave good growth performances and feed conversions for salmon, seabream, seabass, and turbot and very good ones for rainbow trout. GAIN formulations reached, in general, very similar values compared to the control feeds. However, some formulations performed slightly worse in terms of feed conversion: MIX and PAP in the case of seabream, and PAP in the case of salmon. Moreover, available results for the other  key performance indicators  assessed (e.g.: nutrient retention and digestibility; biomarker genes, enzymes, and metabolites; skin/gut histology; organoleptic evaluation) suggest that the novel formulations affect fish physiology,  with fish  likely  driven towards  a new allostatic balance, but no detrimental effects to fish health could be identified.

Overall, these results suggest that the novel  GAIN feed formulations tested are viable options shortly , if not immediately . In any case, the major farmed European species can be fed on  more sustainable and resource- efficient aquafeeds, towards  a zero-waste industry.

This project was financed by the European Union’s Horizon 2020 research and innovation programme under grant agreement N° 773330 (GAIN). 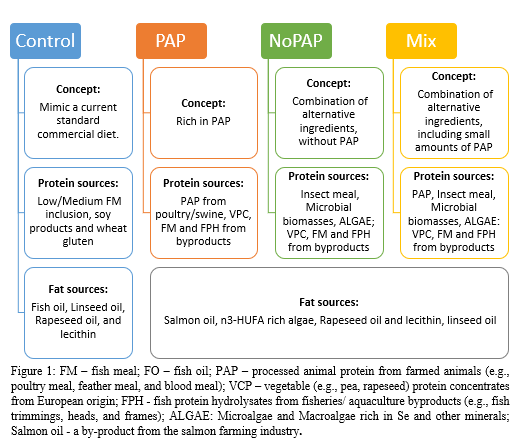