) was applied to Dundrum Bay, Northern Ireland .  SUCCESS addresses (i) the partitioning of nutrient and bacterial loading from land; (ii) the circulation of water and water properties within Dundrum Bay and the exchange with the Irish Sea; (iii) the growth of bivalve shellfish in Inner Dundrum Bay; (iv) the biogeochemistry of Dundrum Bay, as it relates to ecosystem sustainability, in particular with respect to carrying capacity for bivalve cultivation.  Each model has a number of uses per se and addresses different management challenges, and the linkages among models allow the whole set to be leveraged for improved decision-support.

Dundrum Bay is located on the southeast coast of County Down, Northern Ireland. Inner Dundrum Bay is a small, sheltered bay connected to the more exposed south facing Outer Dundum Bay by an inlet channel. Inner Dundrum Bay has two parts which extend on a S SW-NNE axis. The larger northern part (Inner Dundrum North) is approximately 3  km long and up to 1 km wide. The smaller southern part (Inner Dundrum South) extends for  approximately 2  km to the SW and is up to 500 m wide, both drain to the Outer Bay via the Dundrum Outer channel.  The Inner Bay is intertidal except for the inlet channel: it is a mesotidal embayment which is flushed through a single tidal inlet ~200 m wide and ~1 km long. This embayment exchanges most of its volume every tidal cycle due to the tidal oscillation at the mouth of the inlet linking the bay with the neighbouring shelf. This places a large emphasis on the circulation mechanisms of outer Dundrum Bay, where the greater part of the dispersion of land-based pollutants will take place.

The catchment area is approximately 150 km2 and contains  the four main rivers draining into the bay.  Land use is approximately 80% agricultural, predominantly  pastureland for  sheep and cattle, but also pig and poultry farms . There are seven urban wastewater networks in the catchment. Up to 65% of the overall catchment’s major freshwater sources may impact the Inner South area and 35% potentially affect the Inner North.

The designated shellfish waters in Dundrum cover an area of approximately 2.12 km2 and are located in the inner bay (DOENI, 2009a). Aquaculture in the Inner Dundrum Bay area occurs in two licensed areas, where there is a history of shellfish cultivation since 1980. The licensed shellfish area covers 51.6 ha in the north (Pacific oyster and blue mussel) and 11.8 ha in the south (blue mussel), but shellfish culture is in the proximity of the main charted river channels: approx. 12 ha in the north side and 6 ha in the south side.

Example results from the Soil and Water Assessment (SWAT) hydrological model (e.g. Nunes et al, 2017) and the EWN model application to eutrophication control are shown below.

shows the exports of nitrogen, phosphorus, and enteric bacteria from the catchment to Dundrum Bay. The nutrient input to the bay affects primary production, and the bacterial load is important in determining shellfish quality and restrictions to harvest.  As expected, the exports are the most important from October to March, when rainfall and streamflow are the highest. During this period, bacteria and nutrient exports are more important in March and November compared to the December, January, and February. This can be explained by the stop in organic manure application between October 15th and February 1st. The bacteria and nutrient export peaks are observed one month after stopping and resuming slurry/manure application. This seems to indicate a delay of about one month between the input and the export of bacteria and nutrients. In addition, the period with no fertiliser application appears to be more efficient in reducing bacteria than nutrients exports. Finally, TP relative exports are the highest in summer, most likely due to the continuous nature of the final effluents that are the largest sources of TP.

shows the effect of shellfish cultivation on the percentile 90 of chlorophyll in three EWN boxes: Box 2 and Box 4 are the surface boxes where shellfish are grown, and Box 6 is in the centre of the inlet channel.

The increase in the typical chlorophyll maximum ranges from 3.8 to 5.1%.  For the surface boxes where cultivation takes place, the southern part of the inner bay shows a higher difference, but more interestingly, the inlet channel shows the highest difference—these results suggest that the effect of top-down control occurs in a broader area of the bay, since the benthic filter-feeders are removing food from the water passing through the cultivation sites. Changes to cultivation practice will thus be reflected in a more general way on bay-scale eutrophication.

shows the change in chlorophyll concentration for the inner part of Dundrum Bay. Box 1 in the inner bay and box 29, the lower depth layer of the inlet channel, show the greatest differences when shellfish are switched off in the EWN model. Although the difference never exceeds 1 mg L-1, partly due to the short water residence time, it reaches a 23% reduction in box 1 and a 30% reduction in box 29.  The latter is particularly interesting because it shows a pronounced vertical gradient—box 6 only has a maximum reduction of 15%, and neither box 6 nor box 29 are shellfish cultivation areas.

The bay-scale assessment of differences in chlorophyll concentration—one of the primary symptoms of eutrophication—due to top-down control by farmed shellfish, can only be made by means of an ecosystem model. Models such as FARM (e.g. Saurel et al, 2014) or ABC (Ferreira et al, 2021) can determine food depletion within a farm, but they cannot predict what the resulting effect will be at the full bay scale.

Since phytoplankton abundance, biomass, and composition is one of the biological quality elements in the EU Water Framework Directive (2000/60/EC), and since both abundance and biomass are usually represented by chlorophyll as a proxy, system-scale models are a valuable management tool for considering different scenarios for eutrophication management.

The SUCCESS framework provides a model chain that allows managers to review options with respect to land use and coastal boundaries and analyse the consequences of different options, be they source control of emissions or complementary approaches such as enhanced shellfish culture for top-down control of eutrophication. 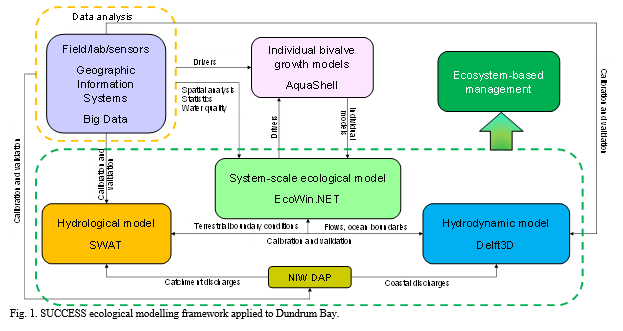 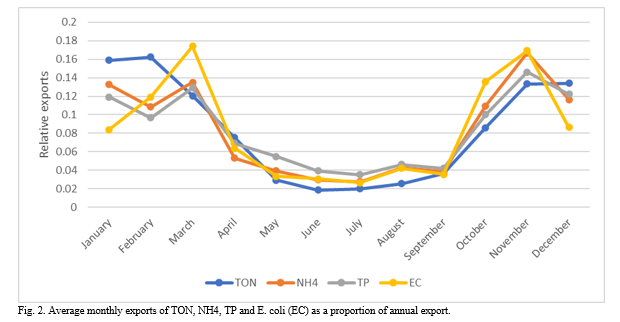 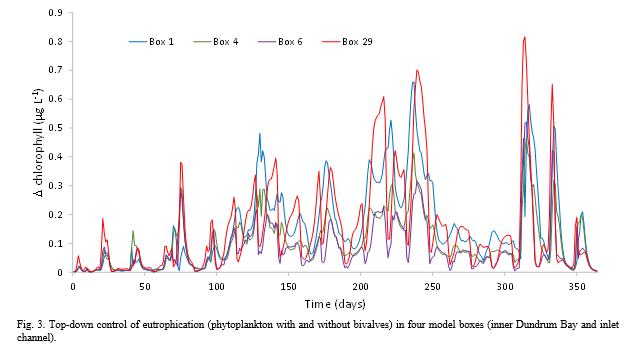